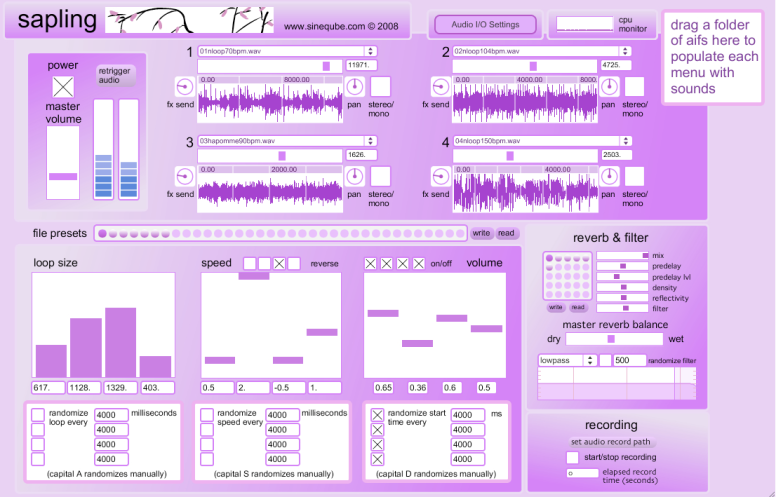 This free application has a lot going for it and with a little practice, some very unique sounds can be found in it. The only disadvantage that I can see is that it takes only aiff audio files, but there are free and inexpensive audio converters out there if any conversion is necessary.  Here are the key features as listed by the web site:

•control loop start time, size, and playback speed of four audio files
• drag and drop a folder of sound files for quick access to custom libraries of sounds
• randomizing of various parameters for unexpected results
• built-in stereo reverb and filtering effects
• record output to disk for further processing or conversion to other file formats
• store your favorite presets quickly and easily
• cpu monitor gives you realtime feedback concerning Sapling’s tax on your machine
• independent effects sends for each file and panning/balance control
• freeware (but <a title=”https://www.paypal.com/xclick/business=k@sineqube.com&item_name=sineqube+software&method=”post”donations welcome)
• On/off toggles for each individual file, with hotkeys
• Ability to save and load presets to and from disk
• Access to I/O settings (Note: this feature was added to fulfill user requests. It has had minimal testing by the beta team, but all reports were positive).

OSX Version At This Page:

“This is a little tool I made in connection with the 10th Ludum Dare competition held in December 2007. Its original purpose was to provide a simple means of getting basic sound effects into a game for those people who were working hard to get their entries done within the 48 hours and didn’t have time to spend looking for suitable ways of doing this.
The idea was that they could just hit a few buttons in this application and get some largely randomized effects that were custom in the sense that the user could accept/reject each proposed sound.

It turned out to work rather well and a lot of the entrants used it, which is cool. Anyone else in the same situation (need some basic sound effects, don’t really care about top quality, have no idea where to get them) should find it pretty useful, if nothing else then just as placeholder sounds to kill the silence until final content has been produced.

Basic usage involves hitting the randomize button (or one of the other buttons to your left if you need a specific standard sound), listen to the generated sound, then deciding if it sounds ok or not. If it does, then export it to .WAV and you’re done, if not – just hit the button again and get something different.
All the parameters used to create each sound are manually tweakable to allow fine-tuning if you feel like getting your hands dirty. Space is a useful shortcut to play the current sound.

There will probably be a minor update of this in the near future, adding some convenient features.

Source code is available and you’re free to use it for anything you please. I’ve put it under the MIT free software license.”

A very deep synth with lots of great presets and access to many programming items. 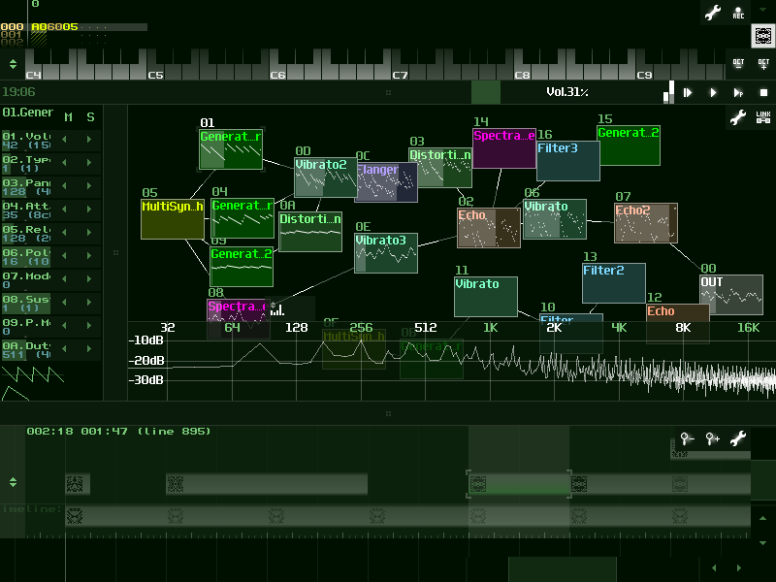 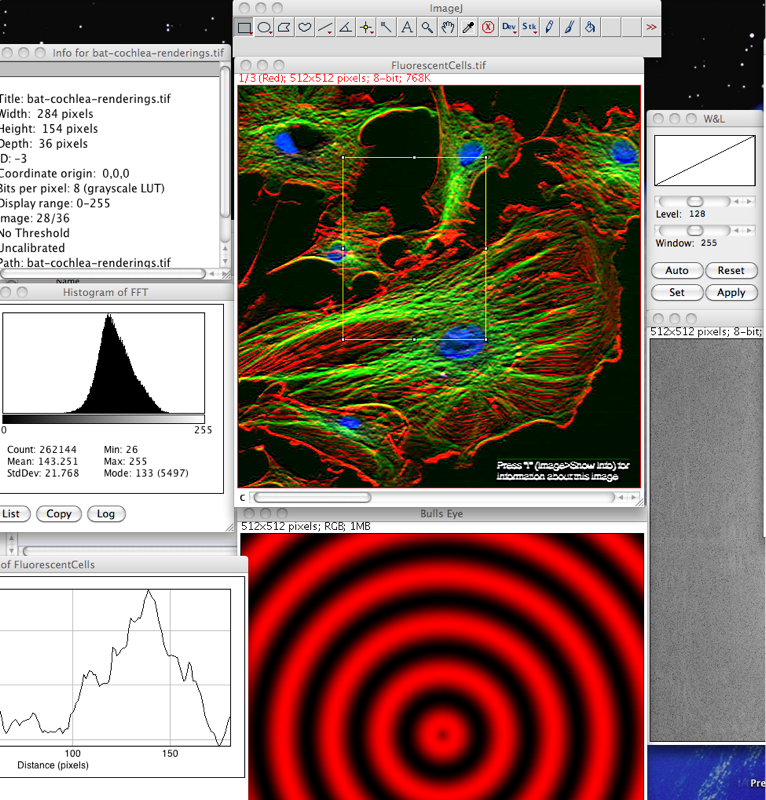 Pencil is an animation/drawing software for Mac OS X, Windows, and Linux. It lets you create traditional hand-drawn animation (cartoon) using both bitmap and vector graphics. Pencil is free and open source. 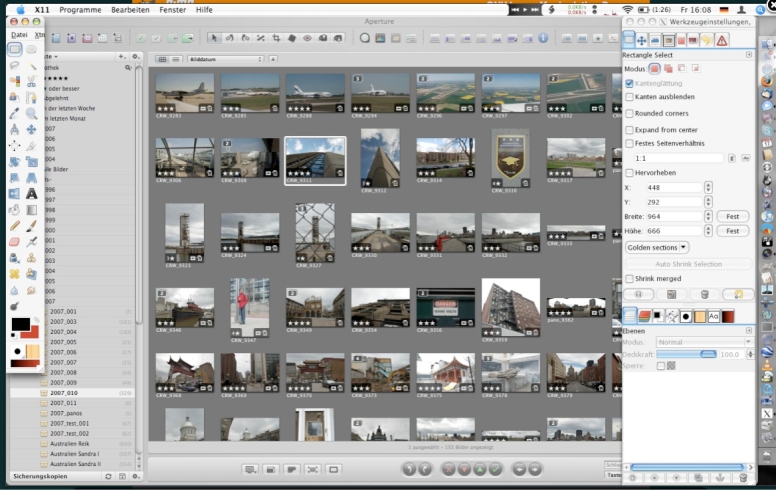 MP is an acronym for GNU Image Manipulation Program. It is a freely distributed program for such tasks as photo retouching, image composition and image authoring.

It has many capabilities. It can be used as a simple paint program, an expert quality photo retouching program, an online batch processing system, a mass production image renderer, an image format converter, etc.

GIMP is expandable and extensible. It is designed to be augmented with plug-ins and extensions to do just about anything. The advanced scripting interface allows everything from the simplest task to the most complex image manipulation procedures to be easily scripted.

GIMP is written and developed under X11 on UNIX platforms. But basically the same code also runs on MS Windows and Mac OS X. 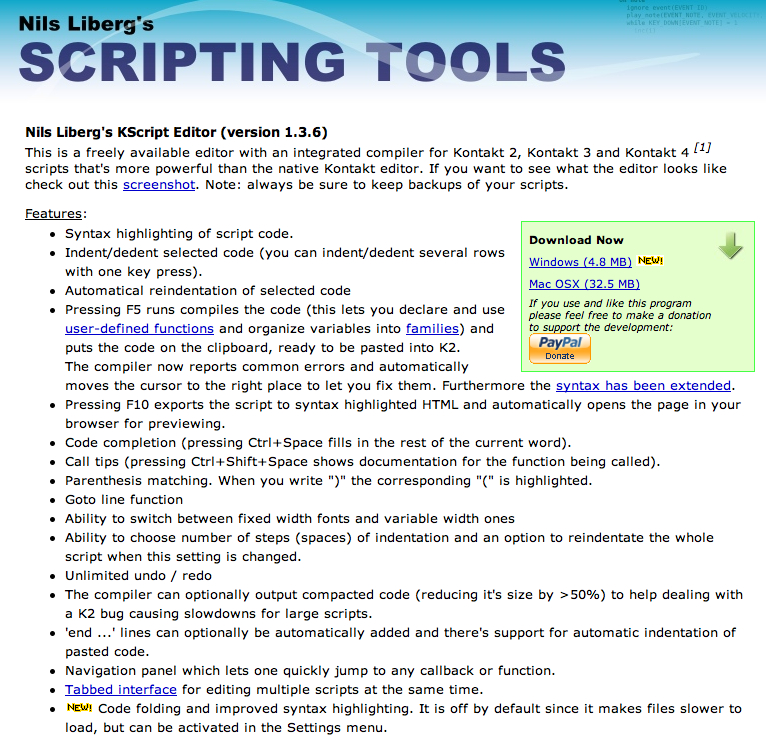