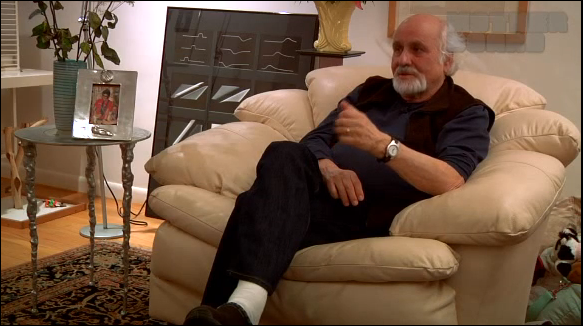 “Morton Subotnick (born April 14, 1933 in Los Angeles, California) is an American composer of electronic music, best known for his Silver Apples of the Moon, the first electronic work commissioned by a record company, Nonesuch. He has taught for many years in the Music School at CalArts.

Silver Apples of the Moon was notable for more than being an answer to a record-biz trivia question. Early electronic music was made using wave generators and tape-manipulated sounds. Subotnick was among the first composers to work with electronic instrument designer Don Buchla. Buchla’s modular voltage-controlled synthesizer, which he called the Electric Music Box and which was constructed partly based on suggestions by Subotnick and Sender, was both more flexible and easier to use, and its sequencing ability was integral to Subotnick’s music.

At a time when electronic music was highly abstract, largely concerned with pitch and timbre, with rhythm an afterthought or of no consequence and patterns largely avoided, Subotnick broke with the academic avant-gardists by including sections with regular rhythms. Its rhythmic energy perhaps has something to do with Silver Apples and 1968’s The Wild Bull (another Nonesuch-commissioned work for tape; they have since been combined on a Wergo CD) being subsequently choreographed by dance companies around the world.

Where previous electronic music had used non-traditional structures, Subotnick’s electronic compositions are structured more like the classical music for acoustic instruments that audiences are familiar with, but with the added benefit of untraditional timbres and pitch manipulations no orchestra could produce. He has, in fact, written for acoustic instruments, and studied with Darius Milhaud and Leon Kirchner at Mills College in Oakland, California.”